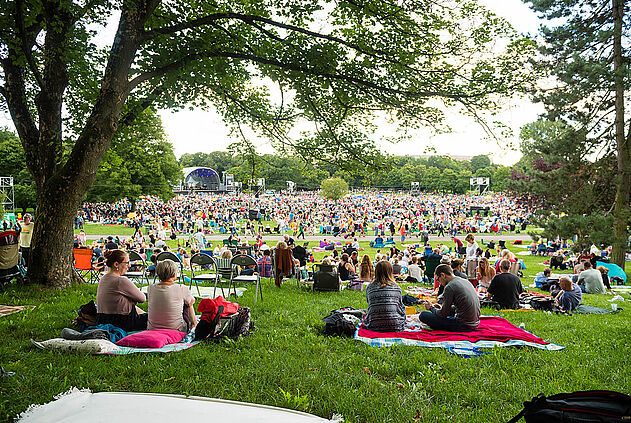 It still is Europe’s biggest and greenest concert hall – Nuremberg’s Luitpoldhain (Luitpold Grove). Since the turn of the millennium, it has been the venue for the City of Nuremberg’s Klassik Open Air. In July and August, the park is transformed into a very special festival site.

Today’s colourful urban society meets for a relaxed picnic with sparklers and fireworks: metal fans set up their camp next to a musical ladies’ circle, a Turkish picnic group shares its bread with Russian concert fans. Connoisseurs of classical music and absolute sound beginners alike sit together peacefully on the meadow, thoroughly relaxed and complete with spontaneous applause and little dance intermezzos. Young and old, families and friends join this pilgrimage to a breath-taking citizens’ party which someone once described as the “Woodstock of classical music”. It is the great stage for Nuremberg’s orchestras – with free entry.

The German goverment decided on 15 april: Until 31 august 2020 all big events including classic open air have to be cancelled due to coronavirus pandemic disease. 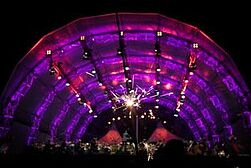 This unrivalled success story started in 2000, on the occasion of the City of Nuremberg’s 950th anniversary. Three free open air concerts performed by the city’s two major orchestras were intended to be a great party in Luitpoldhain. The event was modelled on similar concerts in New York’s Central Park and particularly on the “Proms in the Park” in London’s Hyde Park. The idea was that even people who normally do not listen to classical music could get together in a relaxed atmosphere and free of charge to get to know “their” orchestras. The citizens came to stay – and brought their friends. Due to the musical quality of the Nuremberg State Philharmonic Orchestra and the Nuremberg Symphony Orchestra, the ambience of Luitpoldhain and the relaxed atmosphere, these pleasurable concerts have since developed a veritable evening picnic culture by candlelight. And when ten thousand people light their sparklers, the magic moment happens, every year without fail – supplemented by major fireworks accompanying the final piece of music.

The Magic of Classical Music Works

Nuremberg’s Luitpoldhain had been discredited as a venue for mass events, ever since – in altered form as Luitpold Arena – it served the Nazis as a venue for their “Party Rally Sunday” event of “consecrating the blood flags”. Its original design as a park for the major State Industrial and Trade Fair of 1906 had been completely obliterated by its more recent past. From 1945 to 2000, the final church service of the 1979 German Protestant Church Congress was the only major event held on the site. The Klassik Open Air event changed the way people perceive Luitpoldhain. The magic of classical music redefined the site and created positive associations with this venue. 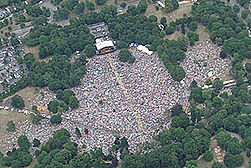 Nuremberg’s Klassik Open Air is today considered Europe’s biggest classical music open air event. After fairly modest audience numbers at the beginning, the event now attracts around 160,000 visitors every year. Since 2013, Bavarian TV has recorded and broadcast the concerts. In addition, in 2013, together with Marcus Bosch, musical director of the Nuremberg State Philharmonic Orchestra, a Family Concert was started. Since then, the Nuremberg State Philharmonic Orchestra and KiKa moderator, Malte Arkona, have introduced a younger generation in particular to classical music on the morning of the first concert day.

The Nuremberg State Philharmonic Orchestra and the Nuremberg Symphony Orchestra entertain visitors with the three concerts of Klassik Open Air, performing very diverse programmes. Every year, there is also a focus on international soloists. In the past, well known greats such as Nikolai Schukoff, Alison Balsom, Simone Kermes, Martin Grubinger, Andreas Scholl, Daniel Hope and Pepe Romero have taken to the stage in Luitpoldhain.

In spite of all the positive experiences with the event and the venue, Klassik Open Air would not have had any future if it had not found sponsors who made their commitment before the City of Nuremberg confirmed the continuation of these concerts. The City of Nuremberg would like to thank the major sponsors of Klassik Open Air: Sparda-Bank Nürnberg, Lebkuchen Schmidt and the Rudolf and Henriette Schmidt-Burkhardt Foundation, as well as all other supporters.

This includes every single concert goer: for they too can support the concerts and thus contribute to the continuation of Klassik Open Air. Nuremberg Culture Award winner, Toni Burghart designed this little bird – which has become a cult object – as the symbol of Klassik Open Air. Are you part of the cult yet?

Entrance to all concerts is free of charge.
The events are organised by the Project Office in the City of Nuremberg Culture Department.